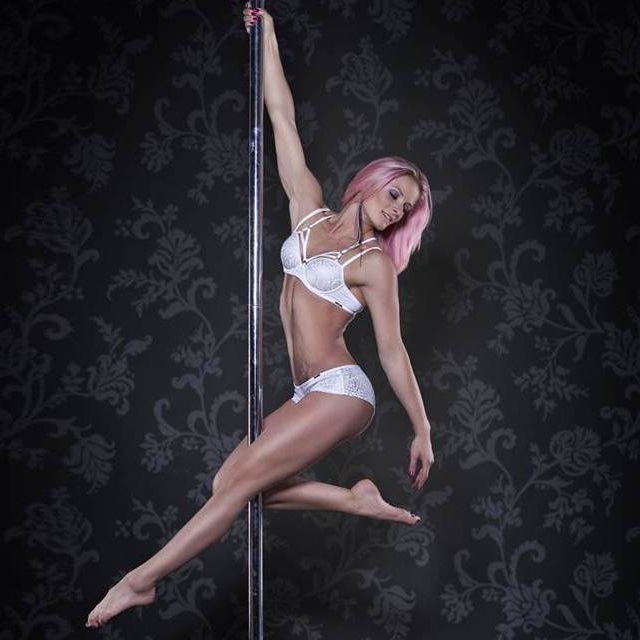 Sammy Lee presents an incomparable performance on the vertical Pole: full of passion, charm and expression, the studied actress tells us her story. She performs with seemingly weightlessness a fusion of breath taking artistry and modern dancing elements. Her eccentric performance combines power and emotion and makes the spectator marvel. Referring to the Cirque du Soleil’s programs, Sammy Lee presents Pole Dance as an innovative form of art that is bizarre, cool and amazing.

Acting as a base

Dancing, movement and expression have become the center of Sammy Lee’s life for many years now. After several successes in artistic gymnastics she studied acting in Freiburg and performed on stages in Zurich and Bern. The abilities she acquired there laid the foundation of the diversity and sweeping interpretations of her shows.

Afterwards she absolved a training as a fitness trainer. Always in search of new challenges she got the possibility to live out her creative talent and to link her dancing and acting skills to Pole Dance in 2011.

Meanwhile she has accomplished to become one of the most popular artists and instructors and that in less than 2 years of gathering experience in Pole Dance. Her concept Polestar @ Polearts delights her audience and students equally. Among her Pole-Arts Studio in Basel, she runs another studio in Freiburg.

Recently she achieved the third place at the European Pole Dance Championships and was contracted by the Canadian Star artist Dominic Lacasse for his popular circus- and variety show in Montreal, Canada in July. There she won the price as Best Artist.

In 2010 Sammy Lee took part in World Poledance Championship in Zurich, was one of the jurors of UK Amateur Pole Performer Championship in Great Britain and came on the stage as guest performer with her show the same year.

Her artful performance enjoys great popularity with various clubs, events of companies, openings of studios of other Poledance –schools and fashion shows. In 2012 she is going to tour across Europe with her workshops, which were fully booked immediately.